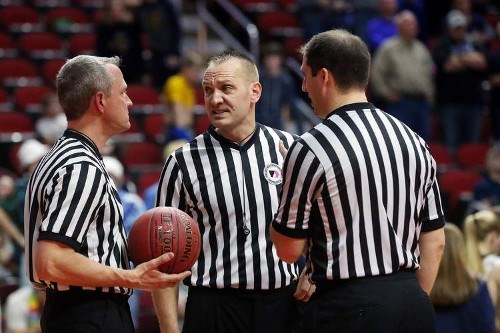 There is an alarming shortage of game officials for high school athletic programs.

In the last few years, scheduled games were canceled in the Metro area because game officials were not available. Activities directors in Iowa are having a difficult time finding “new” officials to replace a large number of officials who have been retiring in recent years.

According to Lewie Curtis, Director of Officials for the Iowa High School Athletic Association, 42 percent of Iowa registered officials in 2016 were over the age of 50.

Mike Valentine is the Coordinator of Recreational Services at the University of Iowa. He is teaching a new course in the Sport and Recreation Management program titled “Sports Officiating: Rules/Theories/Issues.” The goals of the course are to encourage students to become officials, prepare them before they become licensed officials, and to increase the retention rate once they become active officials.

Thirty-one students are in the course for the spring semester.

The issue I hear most often from people who left officiating was the verbal abuse they received during games from many different people. Coaches and athletes bear some of the responsibility for this, but by far “adult fans” was the reason cited by most officials as to why they decided to leave officiating. These same officials enjoyed athletics as former athletes or fans, did not complain about the pay and wanted to “give back” to the students who participate in high school athletics.

They just did not want to put up with the nonsense anymore.

Most of us can plead guilty in terms of yelling at officials when we believe a call “was made” against our team. All of us need to remember game officials are providing a valuable service for educational based activities that benefit young people. Officials are not getting rich and they do not care who wins the “big” game. They want to be invisible to all and provide a fair environment for all participants.

How can you help? Become an official.

I encourage all future and current coaches to become an official. It is a great way to gain perspective as to what officials encounter. In short, it will make you a better coach. Are you a college student? You can earn better pay by officiating a few hours a day then you will by working a lot of part-time jobs. Are you recently retired? Officiating is an outstanding way to stay active and healthy, as well as earning some extra dollars for your own fun activities.

Mike Winker is the former activities director at Cedar Rapids Xavier High School. He now is in his second year as a lecturer at the University of Iowa.