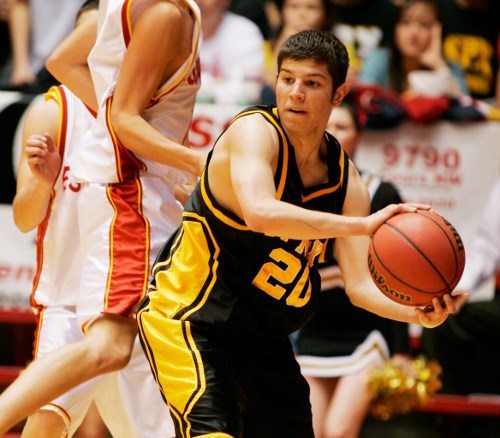 An exception to the backcourt violation and a clarification regarding specifications of the ball comprise the changes approved for the 2018-19 high school basketball season.

The National Federation of State High School Associations (NFHS) Basketball Rules Committee recommended the changes at its April 9-11 meeting in Indianapolis, and all changes were subsequently approved by the NFHS Board of Directors.

Rule 9-9-1 states that “a player shall not be the first to touch the ball after it has been in team control in the frontcourt, if he/she or a teammate last touched or was touched by the ball in the frontcourt before it went to the backcourt.”

An exception was approved to note that any player who was located in the backcourt may recover a ball that is deflected from the frontcourt by the defense.

Theresia Wynns, NFHS director of sports and officials, said the committee approved the exception to ensure that a team is not unfairly disadvantaged on a deflected pass.

The other change approved by the Basketball Rules Committee involved more clearly defining the cover of the ball in Rule 1-12-1c, which now states that the ball “shall have a deeply-pebbled granulated surface . . .”

Wynns said the term “granulated surface” should provide manufacturers a better idea of what a deeply-pebbled cover should look like.

In addition to the two rules changes approved by the committee, several points of emphasis were identified for the coming season, including concussion recognition, proper procedures for blood issues and coaches monitoring injury and research trends.

“The committee wanted to stress continued education in recognizing signs and symptoms of concussions for coaches, athletes, parents and officials,” Wynns said. “In addition, concern of overuse injuries due to sport specialization should be monitored, and recognition of blood on players and uniforms and the proper procedure for removal of blood and return to play are other areas for education.”

Wynns noted that coaches have primary responsibility for making sure players are wearing legal uniforms and are legally equipped. She said emphasis will be given to rule enforcement in the areas of traveling, legal guarding position and establishing possession during loose-ball situations.  Lastly, the committee believes official professionalism and use of proper terminology should be emphasized.

“Overall, the committee believes the rules of the sport are in great shape.  These changes provide more clarification in areas where there has been inconsistency in interpretation and will help manufacturers in producing basketballs that meet NFHS specifications,” said Francine Martin, NFHS Basketball Rules Committee chair and assistant executive director of the Kansas State High School Activities Association. “The committee evaluated input from the NFHS basketball rules questionnaire, which is available for all coaches and officials to complete and provide input for future rules changes during the meeting. The points of emphasis are geared toward sports medicine issues and consistent interpretation of playing rules.”

A complete listing of all rules changes is available on the NFHS website at www.nfhs.org. Click on “Activities & Sports” at the top of the home page and select “Basketball.”

Basketball ranks third in popularity for both boys and girls with 550,305 male participants and 430,368 female participants, according to the 2017-18 NFHS Athletics Participation Survey.