On July 25, 2014, the U.S. Court of Appeals for the Ninth Circuit, encompassing the states of California, Oregon, Washington, Idaho, Montana, Alaska, Nevada, Arizona and Hawaii, ruled that federal disabilities law does not require a school district to make structural alterations to a high school football stadium that was constructed prior to the enactment of the Americans With Disabilities Act (ADA) and that by providing multiple, satisfactory seating options for wheelchair-bound fans, the district had satisfied its legal duty to provide “program access” to those disabled spectators.

Lindsay High School (LHS), located in central California halfway between Bakersfield and Fresno, with an enrollment of approximately 1,000 students and in a town with a population of approximately 13,000, has a football facility typical of those at many small high schools in small communities around the country. It consists of a turf field surrounded by a chain link fence with a single set of metal bleachers on the south side of the field spanning from one 30-yard line to the other, with a seating capacity of approximately 1,500. The complex was constructed in 1971 and has never undergone a significant renovation. The bleachers are not wheelchair accessible; they are accessible only by stairs and there are no clear, flat spaces anywhere on the bleachers where a wheelchair could be positioned.

Spectators who use wheelchairs regularly attend LHS football games and the school specifically designates a variety of locations from which persons who use wheelchairs may watch the contests, including accessible areas behind either end zone, accessible spaces at any of the four corners of the field, and accessible areas along the north or south sidelines at approximately either 25-yard line.
The plaintiff who initiated the litigation, Timothy Daubert, uses a wheelchair for mobility and regularly attends LHS football games. His typical choice of location from which to watch the contests was the paved area behind the east end zone, because it is near the facility’s concession stand and it is an area in which other spectators tend to congregate to watch games.

In his lawsuit filed in the U.S. District Court for the Eastern District of California, Daubert asserted that the Lindsay School District was in violation of the ADA because the football field bleachers were not wheelchair accessible. He contended that he “could not fully enjoy the games because he had an inferior view of the field and had to deal with either looking through a gate [in the chain link fence] or folks periodically walking in front of him and obscuring his view of play.” He argued that the facility’s designated wheelchair areas were in violation of federal disabilities law because they were not equivalent in quality to the elevated stadium-style seating available in the bleachers and they did not provide a football game social experience equivalent to sitting in the stands alongside the other fans in the crowd present to watch the games. The District Court granted summary judgment to the school district and Daubert then appealed to the U.S. Ninth Circuit Court of Appeals.

On September 15, 2010, the United States Department of Justice (DOJ) published revised regulations clarifying the provisions of the ADA applicable to facilities and to events held in those venues, accessibility requirements that are detailed in the DOJ policy guidance titled Americans With Disabilities Act Accessibility Guidelines for Buildings and Facilities (ADAAG). The ADAAG applies only to facilities constructed or significantly altered after the ADA’s legal implementation date of January 26, 1992. The DOJ’s new regulations, titled the 2010 ADA Standards for Accessible Design amended the original regulations interpreting the ADA – the 1991 ADA Standards for Accessible Design. The full-texts of the ADA, the ADAAG and the 2010 Standards are available at www.ada.gov and administrators with technical questions about the application of disabilities law to specific situations at their schools or in their athletics programs may call the DOJ’s ADA Information Line at 800-514-0301 to speak to and receive advisory guidance from an ADA specialist.

Among the issues addressed by the 2010 Standards are the mandated accommodations for wheelchair-bound spectators attending sports events, including the required number of wheelchair spaces in a facility, companion seating, sightline considerations, viewing angle issues, dispersion of wheelchair spaces throughout an assembly area, access to concession stands and restrooms, and entry routes to press boxes for those with authorization. 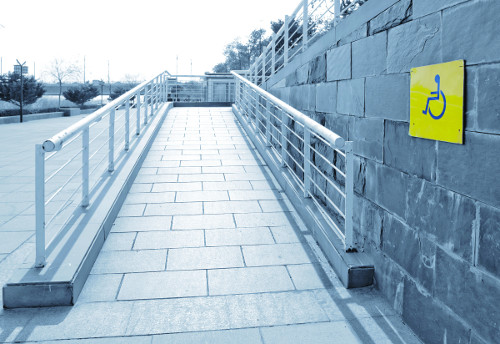 The 2010 Standards require assembly areas with up to 500 seats to provide five wheelchair spaces and companion seats. Those with 501 to 5,000 seats must provide at least six wheelchair spaces and companion seats plus one additional for each additional 150 seats (or fraction thereof). In assembly areas with more than 5,000 seats, 36 wheelchair spaces and companion seats must be provided plus one additional for each 200 seats (or fraction thereof) beyond 5,000. Wheelchair spaces must be an integral part of fixed seating plans in venues, dispersed both vertically and horizontally throughout assembly areas, encompass a variety of admission prices, and provide lines of sight and viewing angles substantially equivalent to those available to other spectators. The 2010 Standards also set forth specific technical requirements regarding all of the issues related to sightlines, viewing angles, dispersion of seating options and other access considerations.

The Ninth Circuit Court of Appeals rejected Daubert’s claim that the Lindsay USD was in violation of the ADA, the ADAAG and the 2010 Standards because of its failure to integrate wheelchair seating options into the football field’s fixed seating plan (the bleachers), ruling that integration of wheelchair options into fixed seating plans is required only for facilities constructed or significantly altered after the ADA’s legal implementation date of January 26, 1992. Because it was constructed in 1971 and had never been significantly renovated, the LHS football facility was considered to be an “existing facility” and the district was obligated only to provide “program access” to wheelchair-bound spectators.

The Court of Appeals noted that program access is a separate and distinct concept from facilities access – the program is the core activity being provided in a facility and the program access issue is the question whether the disabled individual is provided with a substantially equivalent opportunity to view that event as compared to other persons in attendance. Although Daubert argued that program access included all aspects of the comprehensive experience of attending a high school football game, including sitting in the bleachers with the bulk of the crowd attending the event, the Court of Appeals held that the core activity was the game itself and that program access did not encompass the social experience of sitting in the bleachers, stating that “we reject Daubert’s contention that the relevant ‘program’ is the south-side bleachers and we conclude that the School District complies with [disabilities law] so long as it provides program access to its football games.”

The Court of Appeals, analyzing whether Daubert was provided with program access to the LHS football games, concluded that “[f]ootball games at the Lindsay High School football stadium are readily accessible to individuals who use wheelchairs. The School District offers many different locations from which spectators who use wheelchairs are able to view football games, and it is undisputed that such spectators enjoy unobstructed views from at least three of these locations. Moreover, the current seating is appropriately integrated under the circumstances. Spectators who use wheelchairs may sit with companions and are able to sit directly in front of the bleachers, to each side of the bleachers and in other areas where spectators congregate.” The Court of Appeals, therefore, upheld the lower federal court’s ruling in favor of the school district.

• Districts planning new sports facility construction or undertaking a significant renovation of an already existing facility should take affirmative steps to ensure that the architectural, engineering or construction firms contracted for the work are aware of and in compliance with all of the mandates of the ADA, the ADAAG and the 2010 Standards applicable to the project and should seek indemnification for any subsequent disabilities law-related changes mandated by the DOJ or courts after the project is completed.
• Districts with facilities pre-dating the enactment of the ADA should provide multiple, accessible, unobstructed-view options for wheelchair users in all school sports facilities and at all school sports events.
• Avoid providing vantage points for wheelchair users that are at a distance greater than that generally provided to other spectators or at viewing angles that are significantly less advantageous than those from which most fans are able to watch the event.
• Attempt to employ creative approaches to providing a social experience for disabled fans that is as similar as possible to that enjoyed by other spectators and avoid any strategy that might tend to isolate or marginalize those with disabilities.
• Remember that the ADA, ADAAG and the 2010 Standards are not building codes; they are civil rights laws designed to protect a significant percentage of the American population and as such these legal standards serve as moral guidelines that provide schools and athletics programs with a unique opportunity to improve the quality of life for a challenged and particularly vulnerable segment of our fellow citizens.

SETTLEMENT AGREEMENT BETWEEN THE UNITED STATES OF AMERICA AND THE CITY OF MEMPHIS, TENNESSEE UNDER THE AMERICANS WITH DISABILITIES ACT:
http://www.ada.gov/liberty-bowl/liberty_bowl.htm