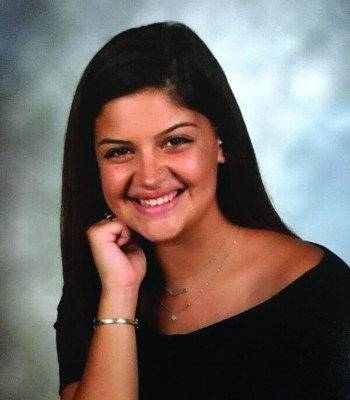 As a youngster at Quaker Hill (Connecticut) Elementary School, Marissa Walker was an exceptional multi-sport athlete with natural talent who was projected to have a very bright future.

That changed forever on February 2, 2009, when the then-nineyear- old Walker was diagnosed with osteosarcoma and had a massive tumor on her left knee that needed to be removed. To address that, she underwent 10 weeks of chemotherapy followed by “limb salvage” at University Hospital in Newark, New Jersey, where doctors removed 70 percent of her femur.

“My first realization that something was wrong was during indoor soccer,” Walker said. “I started complaining about pain in my left knee. It hurt so bad I couldn’t even stand up one night. My knee was the size of a balloon.”

Undaunted, Walker bounced back from those adversities and today is a senior at Waterford (Connecticut) High School, where she is a pitcher and captain of the softball team.

In recognition of her many accomplishments, Walker will receive the 2018 National High School Spirit of Sport Award June 29 at the NFHS’ 99th Annual Summer Meeting in Chicago, Illinois.

The expandable prosthetic joint and femur that was designed and placed in Walker’s leg had to be adjusted every two to three months as she grew – a total of 23 times. After each lengthening, weeks of grueling physical therapy followed. The prosthetic piece broke when she was in sixth grade, which necessitated another surgery to replace it. Two years later, that expandable joint broke, which resulted in yet another surgery in which the doctors placed a permanent titanium rod in its place. Despite three more surgeries during her high school career, Walker has continued her determination to return to the field. 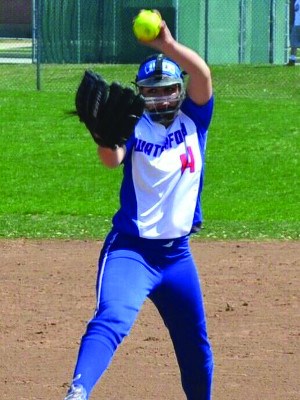 “Marissa’s as tough as they come,” said her father, Pete Walker. “After being diagnosed with osteosarcoma and enduring rounds of chemotherapy, Marissa and her bald head didn’t want to let down her sister by not performing their dance routine in her third-grade talent show. There wasn’t a dry eye in the house as she willed herself to perform. Upon finishing the routine and limping off the stage, she was beaming a smile for the ages despite intense pain. A few days later, x-rays revealed not only a golf ball-sized tumor, but also a newly formed fracture in her femur. She did the entire dance on a broken leg!”

Athletic ability runs in the Walker family, as Pete played baseball 10 years in the Major Leagues as a pitcher for the Toronto Blue Jays – and today is their pitching coach.

“I grew up watching my father playing baseball and I loved to hear the pop of the ball in the glove,” Walker recalled. “I tried swimming, but softball was the only sport that carried over. Being a softball player is part of who I am.”

Keeping it in the family, Marissa’s uncle Andrew (Pete’s brother) is also her softball coach at Waterford High School.

“Since he’s my coach/uncle, I shorten that to ‘cuncle,’” Walker said. “I see him as my second father. He saw me struggle. I respect him as a coach and I look up to him for sure.”

Along the way, Walker has been involved with several “anti-cancer” activities, including Waterford High School’s annual softball “The Play for a Cure Game” with Stonington High School – an event that has grown in attendance and fundraising every year. Walker has been part of that game since its beginning – from throwing out the first pitch in 2010 to being the game’s winning pitcher in 2015.

“Marissa put together a fundraiser called ‘Go Gold for Childhood Cancer’ that raised funds for childhood cancer,” said Waterford High School Athletic Director Dave Sousa. “The original scheduled date for the event got snowed out. Marissa had a surgical procedure just one week earlier, and nobody expected her to be present. Unbelievably, she prepared the program, ran the event and spoke to the crowd of 1,500 leaving not one dry eye.”

Academically, Walker has been a high honor student since middle school, earning the Rotary Student of the Year Award in 2013. She was selected to the National Honor Society as a junior, elected to Class Council all four years of high school and is the Key Club secretary. 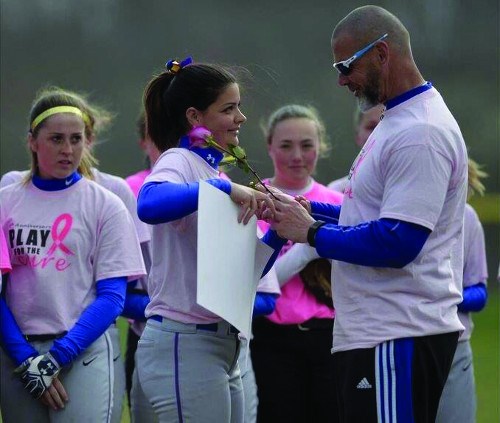 “Marissa is an amazing young lady,” said Waterford High School instructor Elizabeth Cano. “Over the three years I have had her in classes, Marissa never once complained about work or not being able to complete everything in class due to her medical visits, pain management and surgeries. She has handled not only her school work and sports, but also her surgeries and medical setbacks with grace and determination.”

“When Marissa joined the swimming team as a freshman, her mind was ready, but her body was not, so she was out for a while,” said Brett Arnold, Waterford High School head swimming coach. “In one of the first meets back, she swam in the 50 freestyle. She was up with the leaders and finished in third place. Our team went 1-2-3 in that race and that helped us get a win in what was a close meet.”

“Marissa is committed to make a difference in the fight against childhood cancer,” Kari Walker (Marissa’s mother) said. “She has been directly affected in so many ways and has seen friends lose their own battle with this dreadful disease. She’s on a mission to make a difference and most certainly will.”

This fall, Walker will start her freshman year at the University of Miami (Florida), where she will major in nursing with an eye toward working in the field of pediatric oncology. It’s an area that she knows all too well from observing as a patient - and now wants to help others who will deal with the same struggles that she has faced.

“I want to help other people who experienced the type of things I went through,” Walker explained. “I want to tell the little boy or the little girl in the hospital bed, ‘You’re going to be OK.’ They want to hear that from someone who’s actually been through it.”

The essence of Marissa’s life journey is perhaps best summed up by “Cuncle” Andrew:

“Marissa did not want pity early on and still doesn’t. I’ve witnessed her struggle up close … the tears, the heartache, the disappointment and the frustration. Her inner strength and resilient spirit is what makes her so special … her love of competition … her love for her teammates … and her love of the game. Cancer may have taken away her ability to run like the wind as she did in third grade, but it couldn’t touch her soul, her spirit or her heart. Marissa Walker is a winner even if she never steps on the field of play again because her ‘spirit of sport’ can never be taken away; it is a permanent part of her.”