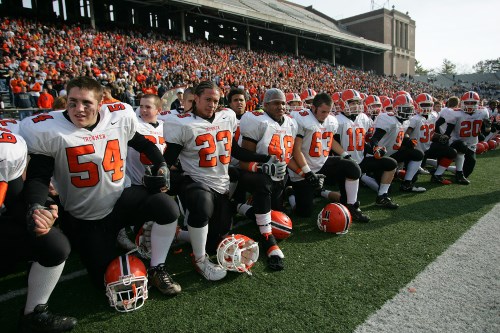 Participation in high school sports has increased for 26 consecutive years, and there are currently more than 7.8 million participants – boys and girls – involved in education-based athletics at more than 19,000 high schools.

During the past quarter-century, nothing has been able to dissuade high school students from participating in sports, including all the communication devices that could keep kids on the sidelines. Undoubtedly, high school sports is one of the longest-running success stories around.

Most assuredly, however, to keep participation numbers spiraling in an upward direction, athletic directors, school and state administrators, coaches, athletic trainers and others in the high school setting will have to answer this question from concerned parents: “Are high school sports safe for my son/daughter to participate?”

Understandably, parents want a level of security with regard to the health and safety of their children. In particular, parents of high school football players are facing questions about the degree of risk involved in allowing their son (or daughter) to participate in the most popular sport at the high school level. During the 2014-15 school year, there were more than 1.1 million participants (boys and girls) in high school football.

Although there is risk of a variety of injuries given that football is a contact sport, the major area of concern for parents today is concussions. Almost every day there is an article published about concussions in some levels of football – from youth leagues, to high school, to college and the National Football League. With the abundance of information circulating about the effects of concussions on individuals later in life, the concern by parents rises.

When speaking with parents of high school student-athletes, we would suggest that a decision about whether to allow their son (or daughter) to play football not be based on information that is circulating about former professional players. The difference in the years playing the sport, not to mention the level of intensity, does not make for a valid comparison.

Certainly, concussions do occur in high school football – and other sports as well. The talking point with parents, however, with regard to the safety of their son or daughter is what is being done at the high school level (a) to minimize the risk of sustaining a concussion and (b) the steps that are taken when an athlete is diagnosed with a concussion.

Through NFHS playing rules and laws in every state in place to govern removing individuals from games who have concussion-like symptoms, to the reduction of contact in practices being implemented across the country, to ongoing education efforts, the focus on risk minimization has never been higher.

In addition to these safeguards that are in place, there is yet another step that could greatly reduce the risk of serious injury in high school football; however, it will not be easy and will require changing a culture. Heretofore, the violent helmet-to-helmet hits that typically cause a concussion have elicited responses from players, coaches, announcers and fans such as: “Wow, what a hit!” or “My goodness, what an unbelievable hit!” or “Did you see that hit?”.

Such was the reaction to the helmet-to-helmet hit that ended Tom Cutinella’s life in October of 2014. His father, Frank Cutinella could easily be blaming, suing and calling for abolishment of the sport. Instead, he is talking about changing a culture so that this sport that is a part of every community across America, will continue to shine bright.

“In order to change the culture, you need to make drastic rule changes and you have to have drastic enforcement of those rules,” Cutinella said recently in an interview with ESPN. “. . . “Coaches have a certain timeframe to get their student-athletes ready to win games, but they have to remember that they are teachers and this isn’t the NFL.” . . . “I could be a guy kicking and screaming and saying, ‘Don’t play football,’ but Tom wouldn’t want me to say that.”

Very simply, contact with or to the head must stop. It must not be taught by coaches and must not be praised by announcers and fans. Initiating contact with the shoulder eliminates much of the risk. Changing a culture takes effort and time, but there are 7.8 million reasons to make it happen.

If some parents are still uneasy about football, suggest that their son or daughter play another fall sport. The key is to stay involved to receive the benefits of education-based sports.