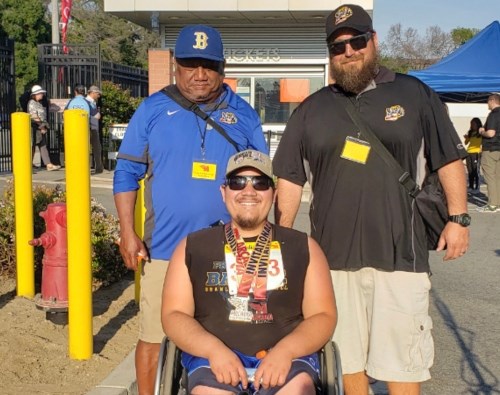 Athlete exposure has proven to be a vital part of breaking down the walls of the silo. It has increased the amount of state high school associations offering competition in wheelchair and adapted sports. Currently, more than 30 states report offering adapted and/ or wheelchair sport programming. The California Interscholastic Federation (CIF) is one of those organizations.

This was a game changer for Tagaban, who had one specific student in mind when he returned to Brawley.

“I always saw Juan zoom up and down the high school on his chair,” Tagaban said. “So, when I went to that meeting and they were talking about para-athletes and how they could score and stuff and we could change a life, I thought he could be a big part of the track team.”

Tagaban has proven during his four years at Brawley that he is a coach focused on inclusion. He has taken the program from 20 athletes to 140 athletes. This rapid growth is due to the way in which Tagaban and his coaches treat each athlete.

“I give everybody the opportunity to run and do what they want,” Tagaban said. “And as long as they workout, they get to travel. That’s what they like. It’s open to everybody.”

Juan Rodriguez was treated no differently. Tagaban enlisted the help of his throws coach, Ray Vandiver, in the recruitment of Rodriguez due to their connection in the classroom. 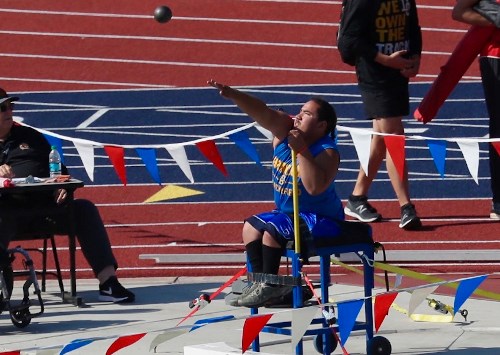 “When Juan was here his freshman year, I was assigned to him as a one-on-one para-educator,” Vandiver said. “So, I was working with him to help him transition from the middle school to the high school. I had a good relationship with Juan to start.”

It was because of this relationship that Tagaban relied heavily on Vandiver to not only get Rodriguez on the track, but to find the necessary resources to enable Rodriguez to compete.

“I had no clue what I was doing,” Vandiver said. “I was very honest about that. I went on YouTube and started looking at these athletes competing – these high-caliber athletes competing and went from there and got some training techniques. To me it was like, ‘hey this kid wants to compete, why should he not be allowed to compete? He has the same rights as every other student here.’ I just wanted him to do something. If you want to do it, then we are going to do it the right way. This is not going to be us out here just messing around. We are going to get out here and work.”

Finding resources meant finding a way into the silo. It began with reaching out to their own special education department. That turned into a connection with the USATF National Para-Athlete Committee – specifically, Richard Robert who became Vandiver and Tagaban’s most reliable resource. Once that connection was made, the walls of the silo began to come down. Soon, Vandiver and Tagaban were in touch with the Challenged Athletes Foundation (CAF) and were able to secure much needed equipment for Rodriguez.

“We borrowed a racing chair from another athlete in the area that had raced previously,” Vandiver said. “As soon as we got his racing chair to the track, Rich called me and coached me on how to coach him – the body mechanics of his strokes and his positioning. That’s when he started giving me pointers about the shot put as well.”

The CAF stepped in and provided the throwing chair. Vandiver remembers loading the chair in the back of his suburban after a meet in San Diego and driving it directly to his cousin’s house.

The next day Vandiver went shopping for the required straps and stakes for the throwing chair. He spent that afternoon sitting in the chair shifting his weight around, trying to do everything he could to test the stability before he ever let Rodriguez into the new piece of equipment.

This became the process for the 2019 season. Vandiver would chip away at the silo, find a resource, test it out and then apply it to his coaching.

“You just have to make adjustments,” Vandiver said. “Obviously, you can’t do the same workout with an able-bodied athlete as you can with a para-athlete, but the attitude you bring – I told him I’m going to treat him the same as the other athletes.”

That’s exactly what Rodriguez has become. Just another athlete.

“When we first started and we didn’t have a throwing chair, Juan would go into the throwing ring in his daily chair. There would always be a kid saying, ‘I’ll hold him. I’ll hold the chair.’ He’s just one of the guys now,” Vandiver said.

Tagaban credits Rodriguez for being a leader and in many ways the glue holding the 140-member team together.

“It’s been a good ride,” Tagaban said. “It’s a blessing. I needed somebody like him to open the kids’ minds. The kids need something else in track because a lot them don’t want to be a part of this group or that and Juan brought them together. The team likes being with him.”

Breaking down the barriers between the able-bodied and the disabled on the track has had ripple effects in the classroom as well.

“I work with Juan in the classroom too,” Vandiver said. “His attitude in English class, once he got involved, was like night and day. He turned into a better student. He was more involved. He’d speak up. It was a total 180. It was awesome to see. His teachers saw it too. His grades improved. He put more effort into it. I think just being out there on the track with the other athletes, that camaraderie that you build – it built his self-esteem and it made him a different individual.”

This is just the beginning for Tagaban, Vandiver and Rodriguez. They have goals to outdo their performance in the 2019 CIF State Finals in which Rodriguez left with first-place finishes in the 100 and 200 and finished second in the shot put. “For me and Ray, the athlete comes first,” Tagaban said.

Barriers are good excuses to stop trying, but successful people use barriers as excuses to try harder. What you find on the other side might be a whole world of information that impacts yourself and others in ways in which you never would have imagined.

Lindsey Atkinson is director of sports/communications associate at the National Federation of State High School Associations.