Beyond the Whistle: Basketball Officials Try to Make a Difference 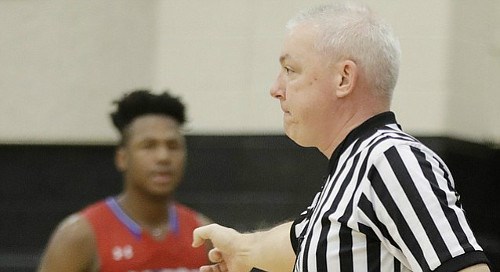 From the Lawrence Journal-World:

Sitting inside of their makeshift locker room at halftime, high school basketball officials Phil Lombardi and Mark Samsel immediately discuss one of their calls from the first half.

Serving on a three-man officiating crew during Free State’s boys basketball game last month against Bishop Miege, they awarded two points on a jump shot that was near the 3-point arc. After the shot was made, Samsel stopped play and walked to midcourt to confer with Lombardi.

Following a brief discussion, the shot remained a 2-pointer. At halftime, they sat in a teacher’s office alongside fellow official Josh Roberts to go through their thought process. Samsel was “100 percent sure” it was a 3-pointer and thought he had a good angle. On the court, he was less confident with his wording to Lombardi.

It was a learning moment for the crew that was heavy on experience. Lombardi, a former college baseball player at Benedictine, is in his 19th season with the Kansas High School Activity Association. He's worked many games with Roberts, who is in his 17th year.

With a focus on making the right calls, the trio talked over scenarios prior to the game. They would discuss calls during timeouts and before free throws. Sitting on a couch, chair and table in the locker room, it was a chance to go more in depth.

“I joke with parents and say the game is very easy from the stands,” Lombardi said. “But there’s a little bit of truth in that.”

If it was college basketball or the NBA, the officials would’ve walked to TV monitors to review the borderline 3-pointer. Instead, Samsel said he will have to wait until he is sent video of the game on Hudl, a popular game footage website. A business litigation attorney in Overland Park, Samsel will rewatch games or specific plays when he can find the time.

During games, all of the officials do their best to make improvements in real time.

Read more from the Lawrence Journal-World.

Missouri's Urhahn to Retire at end of 2021-22 School Year