Head coaches in high school basketball will be allowed to come onto the court in an effort to break up a fight or keep a situation from escalating. Previously, the head coach could only enter the court if beckoned by an official.

While the head coach and his/her assistants must continue to ensure that players remain on the bench during a fight, the committee agreed that the presence of the head coach on the court could be instrumental in preventing the situation from escalating, and the coach also could assist game officials in controlling the situation.

“By removing the requirement of the head coach being beckoned onto the floor by the officials, it should result in a more expedient resolution of the situation and restoration of order,” said Theresia Wynns, NFHS director of sports and officials education. “The change also will allow the officials a greater opportunity to assess appropriate penalties by being able to observe the situation because of the increased assistance the head coach(es) will provide by their presence.”

Teams, however, cannot use electronic equipment for voice communication with players on the court, and the use of electronic audio and/or video devices are not allowed to review a decision of the contest officials.

Leg-compression sleeves shall be white, black, beige or a single solid school color; shall be the same color for each team member; must meet the logo requirements in Rule 3-6; and must only be worn for medical reasons.

The final rules change approved by the committee for the 2013-14 season will permit a single, visible manufacturer’s logo/trademark/reference on the team jersey, not to exceed 2¼ square inches with no dimension more than 2¼ inches. The manufacturer’s logo may be located no more than 5 inches below the shoulder seam on the front of the jersey, or 2 inches from the neckline on the back of the jersey, or in either side insert.

Wynns said this change will bring basketball in agreement with other NFHS sports rules and allow the use of a single manufacturer’s logo on the jersey of the playing uniform.

In addition to these rules changes, the committee approved a new defensive tip signal that will be added to the Basketball Officials Manual. This signal will be given by the official when the ball enters the backcourt as a result of contact with the defensive player. 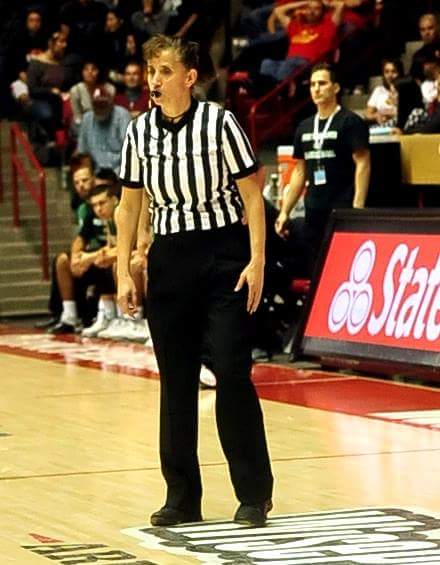 Spotlight: Lisa Romero, basketball official, New Mexico Activities As.
Instructions to and Duties of Scorers and Timers for Basketball Games

NFHS/NFHS Network Signs Agreement with TPG to Manage Sponsorship and .