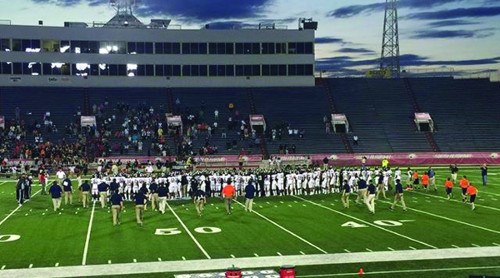 When the start of any sporting event is delayed, chances are there will be some annoyed fans in the bleachers. For a high school homecoming football game especially, one would expect both players and fans to be even more anxious to get such an important game underway. However, on the night of September 24 in Mobile, Alabama, this was certainly not the case.

Before the Troy (Alabama) Charles Henderson High School Trojans and the Mobile (Alabama) Davidson High School Warriors kicked off on that Thursday night, the Warriors carried out one of the more touching and unexpected acts of sportsmanship witnessed in recent times. Tears were shed both on the field and in the stands, and for a few emotional minutes, a delayed football game became inconsequential. An incredible moment of catharsis for the teams and community was all in memory of one player: Demario Harris Jr.

Almost one year ago to the day, the Trojans and Warriors faced off in Troy, Alabama, just like the thousands of other teams around the nation on a Friday night under the lights. However, tragedy struck when Harris, the beloved senior cornerback for Charles Henderson High School, collapsed on the field during the first half. In the hospital two days later, he passed away at 17 years of age. Harris had suffered from a ruptured brain aneurysm during the game. Even though the aneurysm was deemed to have nothing to do with football, the sudden passing of one of the school’s brightest stars hit the community hard.

“Demario’s passing was really just like a dark cloud over our community,” said Brent Harrison, principal of Charles Henderson High School. “He was a very well-liked and well-loved student.”

At Harris’ funeral the next week, Davidson Head Coach Fred Riley, his staff and his senior football players were in attendance to pay tribute. In a public letter to Davidson, Harrison was impressed by the class and kindness of the Davidson team.

“[Their attendance] is not out of the ordinary in the sporting world. Had this been the only act of paying tribute to Demario, most would have agreed that it would have sufficed and been appropriate.”

However, that tribute on Harris’ behalf turned out to be just the beginning, much to the surprise of the Charles Henderson community. This year, the game between the two schools was played at Davidson during its homecoming week. Instead of some of the usual boisterous homecoming celebrations, the Davidson students and staff chose to pay homage to Harris.

Throughout the homecoming week, orange shirts bearing Harris’ nickname, “Squirrel,” and No. 10 were sold by students at Davidson. Those shirts were worn by the Davidson band under their marching uniforms during the game, and the Warrior cheerleaders even wore Charles Henderson colored blue and orange ribbons. Then, before the game on Thursday night, the Warriors held a ceremony on the field to honor Harris and his family, causing the slight delay in the kickoff. 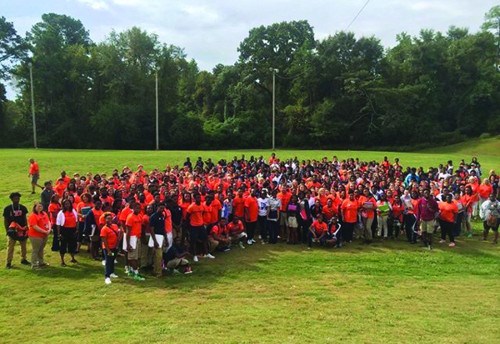 When the Davidson players ran out onto their home field, they passed under a banner that featured a drawing of a Trojan jersey with Harris’ name and number. Following the coin toss, the teams met at midfield for a moment of silence. Afterward, players and coaches from both sides shook hands and embraced, releasing emotions of grief and sorrow that had been building up for the past year.

Davidson also purchased a plaque dedicated to Harris that was presented to Trojan Coach Brad McCoy and his players. The plaque was later presented to Harris’ father, who was attending a Trojan football game for just the second time since his son’s untimely passing. Even though a big game was about to kick off, none of the people on the field seemed to care about football.

“There was a real sense of relief for everyone that night. What Davidson did in Demario’s memory absolutely provided some closure for this school and our community,” Harrison said. “To see the time and preparation they put into honoring him was beyond incredible.”

The pre-game ceremony organized by Davidson was beyond what anybody at Charles Henderson imagined, much less expected, Harrison said.

“We had talked about doing some things of our own to honor Demario during the week before the game, but what Davidson did was a total surprise. I was awestruck by the length to which Davidson High School went to help us pay tribute to Demario and heal through this difficult time.”

At the end of the night, the Trojans would end up losing to the Warriors by a score of 34-10. Such a result would usually be a tough one to handle, but for the Trojan players the post-game feeling was much different than normal, all thanks to the extraordinary compassion shown by Davidson High School.

“Our kids were disappointed to lose on the anniversary of Demario’s passing, but in the end, they weren’t overly devastated. They were almost tranquil,” Harrison said. “There could not have been a better, classier team that we could have lost to.”

In a moment that transcended sports, with a little support from their opponent, the Charles Henderson community was able to heal the wounds of its most painful tragedy even a year later.