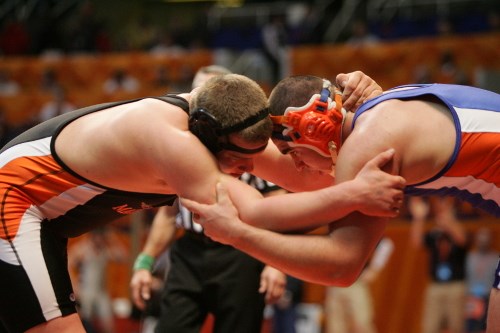 In an ongoing effort to minimize the risk of injury in high school wrestling, additional time will be given to evaluate head and neck injuries when an appropriate health-care professional is present at a match.

In addition to the 1½ minutes of injury time allotted for each wrestler, an appropriate health-care professional will have a maximum of five minutes to evaluate injuries to the head and neck involving the cervical column and/or nervous systems. At that point, the wrestler would have to continue or default the match.

This revision in injury time in Rule 8-2-4 is one of 17 rules changes recommended by the National Federation of State High School Associations (NFHS) Wrestling Rules Committee at its April 3-5 meeting in Indianapolis. All recommendations were subsequently approved by the NFHS Board of Directors.

A second injury to the head and neck involving cervical column and/or central nervous system in the same match shall require the wrestler to default the match. If an appropriate health-care professional is not present, all injuries to the head and neck would be covered by the same timeframe as other injuries. In the case of a wrestler exhibiting signs of a concussion, the individual would be removed from the match and could not return to competition in the absence of an appropriate health-care professional.

In another change geared to increase the level of offensive wrestling, stalling has been removed from the progressive penalty chart and will be penalized separately. In Rule 8-1-4, the first penalty for stalling will be a warning. The opponent will be awarded one match point on the second and third offenses, two match points and choice of position on the next restart for the fourth offense. A fifth offense for stalling will result in disqualification.

“By removing stalling from the progressive penalty sequence, officials will be able to penalize wrestlers more freely without complicating the matter when it is combined with other penalties,” said Elliot Hopkins, director of sports and student services and liaison to the Wrestling Rules Committee. “Removing the stalling call from the penalty progression will allow officials more freedom to call stalling earlier, more consistently and without hesitation when they feel it is warranted.”

Changes were made in several rules dealing with uniform requirements in an effort to ensure that male and female wrestlers are properly attired on the mat during competition.

In other uniform and equipment changes, if shoelaces come undone, the penalty is an automatic stalling call. In Rule 4-2-1, hair-treatment items that are hard and/or abrasive, such as beads, bobby pins, barrettes, pins and hair clips, shall not be permitted. A legal hair-controlled device such as a rubber band shall be secured so as not to come out readily during wrestling.

“Hair that is manipulated poses no threat to either wrestler,” Hopkins said. “It is neither abrasive nor cumbersome. However, physical hair treatments do present a risk to either wrestler due to the hardness, texture or abrasiveness, and should not be allowed.”

In other changes, Rule 7-3-1 now states that “when the referee feels that either wrestler has failed to make every effort to stay inbounds during an imminent scoring situation, the offending wrestler shall be penalized for fleeing the mat. . .”

“This change allows the referee to only apply the technical violation call of fleeing when the action is related specifically to a scoring situation,” Hopkins said. “All other types of leaving the wrestling area as a means of avoiding wrestling would fall under the rule of stalling.”

According to the 2017-18 NFHS High School Athletics Participation Survey, wrestling is the seventh-most popular sport for boys with 245,564 participants in 10,775 schools. In addition, there were 16,562 girls who participated in wrestling in 2,351 schools.