As the national leadership organization for high school athletic and performing arts activities, the National Federation of State High School Associations (NFHS) provides services to its 51 member associations (50 states plus the District of Columbia) in the areas of speech, debate, theatre and music along with its rules-writing responsibilities in 17 sports.

While all member state associations are involved with administering athletics, 27 have programs for other activities, ranging from the more common activities of speech, debate and music, to offerings such as robotics, rodeo, creative writing and science fair. In the other 24 states, high school programs for speech/debate and music are administered by outside groups.

Although speech, debate and music programs are offered by a majority of the 27 NFHS-member activity associations, some states provide as many opportunities for these programs as they do in the athletics area.

One of the associations involved in a multitude of activities is the New Mexico Activities Association (NMAA), with 23 activities for high school students, along with administering 13 sports. In addition to speech and debate, concert band, choir and drama, the NMAA sponsors activities such as rodeo, chess, science Olympiad, science fair, FFA, JROTC, student council, scholastic publications, Business Professionals of America, SkillsUSA and English Expo.

The Texas University Interscholastic League (UIL) offers the most comprehensive program of academic competition in the nation with more than 500,000 students (grades 2-12) participating in UIL academic contests each year. The UIL also sponsors programs in theatre/film, speech and debate, journalism and music. 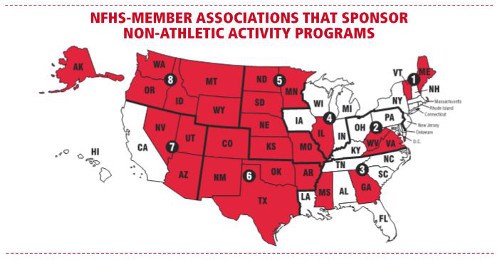 “The KSHSAA and its member schools strive to develop well-rounded students in all facets of the high school experience,” said Gary Musselman, executive director of the KSHSAA and president-elect of the NFHS for the 2015-16 school year. “As an activity association, our music and fine arts programs reach the greatest number of students of all of our activities.

“Offering scholars bowl, music, speech and leadership development activities ensures students the opportunity to explore and develop their interests and talents in a variety of ways. Our menu of non-athletic offerings affords schools the opportunity to engage and involve more students in education-based, co-curricular activities and helps the KSHSAA maintain its educational student-centered focus.”

In Colorado, about 25 percent of the state’s high school students participate in non-athletic activity programs. Bert Borgmann, assistant commissioner of the Colorado High School Activities Association (CHSAA), said more than 37,000 students participated in Colorado’s music programs in 2014-15, making it the single largest non-athletic or athletic activity sanctioned by the CHSAA. The CHSAA also offers speech competition at two different state events and had more than 8,200 student participants during the regular season.

Borgmann also noted that the association is extremely cognizant of the need for strong leadership programs. Through its Student Council program, more than 7,000 students participated in summer and fall conferences. Almost every CHSAA school has involved students in these programs during the past three years.

“For a student to have the ability to participate in multiple activities, whether they are non-athletic or athletic, is a great predictor of future success,” said Paul Angelico, CHSAA commissioner. “It adds to the student’s growth into a well-rounded individual and open doors that might previously have been closed.

“We believe that it’s crucial for our organization to offer the very best to our student participants in speech, music and student council, as well as on the athletic fields of play. We think we have established a good base for all of our participants with our programs that reach all aspects of the modern high school.”

Although one of the smallest associations with only 86 schools, the Vermont Principals Association (VPA) offers a number of student activities, including debate and forensics, drama festival, Scripps Individual National Spelling Competition, science and math fair, geography bee and spelling bee.

In Minnesota, more than 80,000 students are involved in fine arts activities – debate, speech, drama, music and visual arts. In addition, the Minnesota State High School League (MSHSL) was the first state to sponsor state competition in clay target and robotics. More than 6,000 students are involved in clay target and more than 3,700 in robotics. In 2014, The Arizona Interscholastic Association became the second state to offer competition in robotics.

Bruce Howard is director of publications and communications at the NFHS and editor of High School Today.